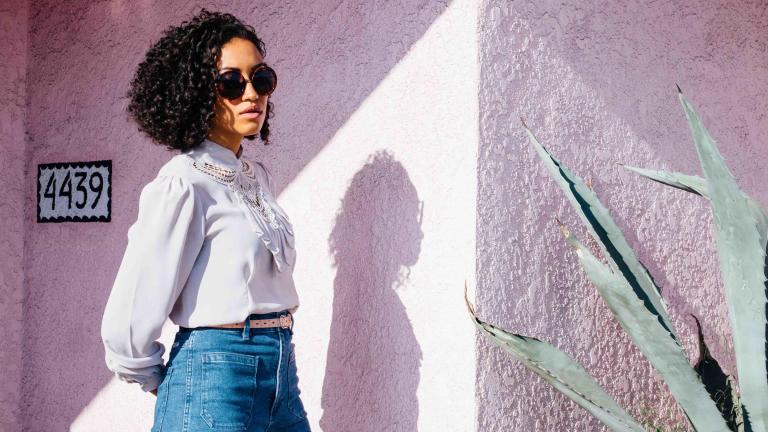 Kadhja Bonet “was born in 1784 in the backseat of a sea-foam green space pinto. After spending an extraordinarily long time in her mother’s plasma, she discovered the joys and gratifications of making noise with her hands and face while traveling at maximum velocity through intergalactic jungle quadrants”. This is what the LA-based artist’s Bandcamp bio describes herself as, and whilst you don’t need an intergalactic device to categorise her sound, it’s distinct enough that it’ll tantalise most listeners for more.

I returned to her music following her atmospheric feature on the opener to Anderson. Paak’s latest album, ‘Oxnard’.

Take a listen to the minor 1974 hit ‘Remember the Rain’ by Chicago group 21st Century – it’s a lush song with really youthful vocals that peak in the chorus, and peppered with some powerful harmonies and a touch of spoken word, it retains a soulful energy, a raw emotion. Now give Kadhja Bonet’s cover a go – it sounds as though she’s effortlessly in control, but don’t miss the outstandingly beautiful vocal runs dotted around the chorus, crafting a more nostalgic take on the story of the unfaithful partner (with some added flair from the flute solo that comes during the outro). It wouldn’t be out of place in a Bond film, it’s got that level of allure to it. The cover nears a mix of Isaac Hayes and Solange, except the multi-instrumentalist Bonet also has almost total control of the arrangements in her music in terms of writing and performing, and the results can often be magical.

Her debut effort comes in the shape of ‘The Visitor’, a short affair that clocks in at just under half an hour. ‘Earth Birth’ introduces the listener, acting almost as an instrumental primer to pair with the self-written biography mentioned above, before the warmth of lead single ‘Honeycomb’ comes in, Bonet’s voice offsetting the 1960s reminiscent string-powered track with verdant lyricism from the outset:

the sweetness that is you,

and I the humble bee that brings the pollen to

The one-two punch of ‘Portrait of Tracy’ and ‘Nobody Other’ that comes in the latter half of the record is perhaps the must-listen segment. In the former, strings give way to genuinely stunning harmonies as bass guitar and drums join the homage to legendary bassist Jaco Pastorius, resulting in a swirl of jazz, gospel, folk, soul, and R&B, with so many musical atmospheres and phrases being stitched together in a virtually seamless fashion. This then yields to the guitar-led romanticism of the latter track, a more minimalist song, Bonet’s vocals on full display in a much more vulnerable fashion, a motif heightened by the scratch of fingers on the fretboard of the guitar.

Whilst ‘The Visitor’ for the majority of its time rests in a bashfully languid middle tempo, this year’s ‘Childqueen’ has flashes of funk, perhaps best seen in lead single ‘Mother Maybe’. It’s clear she’s realised that her voice is her weapon, and even beyond the lyricism this is felt, especially in the closing third of the track as Bonet belts pristine falsetto notes with such power that it feels as though this was undoubtedly the next step for her. Celestial harmonies and a bass-line that leaves your head nodding are just icing on top of the cake.

Delphine is another highlight, sensually spinning a web that forms the perspective of an obsessed lover, with vocals again taking the foreground, the listener able to hear the percussive elements as Bonet opens her mouth to submerge your ears. Her vocal acrobatics, soaring above all, are so captivating that you barely notice the track runs for almost six minutes. The subtle intricacies of the instrumental should not be missed however – a woozy funk-bass wobbles and transforms in the background whilst synths flitter in and out of the scene, simple percussion providing the hypnotising rhythm. Keep in mind that Bonet writes and plays virtually everything she writes, and it’s an impressive feat.

“They [‘The Visitor’ and ‘Childqueen’] definitely link for me. I knew where I wanted to go with it.

The first record, thematically, was supposed to be about being visited by your true inner self, and having this reflection of who you wanted to be and who you were meant to be, and realising how far away from that you are, and thinking ‘Oh shit! I’m like a tenth of the person that I wanna be’.

And so ‘Childqueen’ is about starting the journey of thinking about how I start moving towards that, and closing that gap between who I want to be and who I am.”

Indeed, her initial otherworldly description of herself is perhaps a slight exaggeration, but this is a level of personal growth that we rarely see in music. Kadhja Bonet’s star is decidedly rising.

This article was written by Mo Hafeez